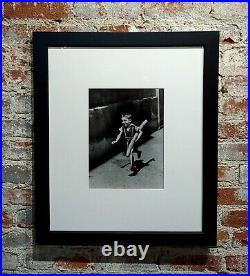 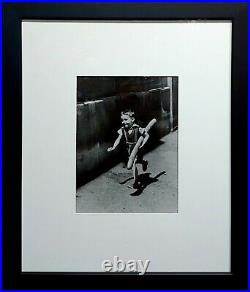 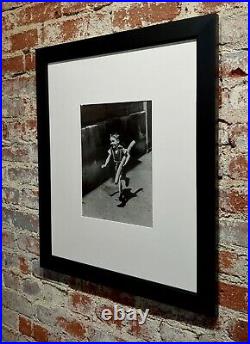 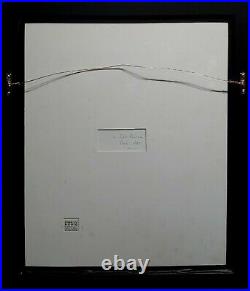 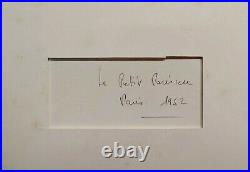 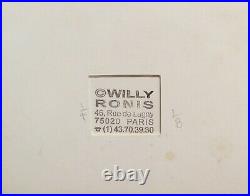 Image size about : 12.75" H x 10" W. Willy Ronis was active/lived in France. He is known for magazine photography, city life genre, children. Anyone could call him, and the door of his modest apartment in a quiet part of the working-class 20th Arrondissement of Paris was open to all: young photographers, admirers and strangers who recognized themselves in his pictures. The man who addressed everyone with the informal French tu was one of the last humanist photographers of the Paris school, alongside Robert Doisneau, Henri Cartier-Bresson and Sabine Weiss.

The first major retrospective of his work in 10 years, and the first since his death, opened this week at the Pavillon Carré de Baudouin in the Belleville-Ménilmontant area of the 20th Arrondissement. And it is keeping Roniss generosity alive: Entrance is free. Ronis, the son of Jewish immigrants from Eastern Europe, had dreamed of becoming a composer. He did his first photo-reportage on July 14 Bastille Day after the Popular Front, an alliance of leftist parties, won the French general election. The young Ronis felt a communion of spirit with the people of Paris, and with the Communist Party, of which he became a member for 20 years.

Gérard Uféras, a photographer and a friend of Ronis, as well as the executor of his will, recalled in a recent interview how important political commitment was for Ronis: Willy used to say, As a man and as a photographer, I will die with my heart firmly on the left. He famously stopped working for New York Magazine, however, after it published a sneering caption with a photo he had taken of a trade unionist. 29, was curated by the photographer himself. Twenty years before he died, when he decided to bequeath all his works to the French state, Willy started going through every single one of the 26,000 or so pictures he took since the early 30s, and chose 590 of them as his visual testament, Jean-Claude Gautrand, another close friend of Ronis, explained in an interview.

He neatly placed them in six albums, with a comment for each image. Uféras are the official curators of the show, but they insist they were only middlemen. We had to select 200 out of the 590 images from Roniss albums, as it would have been exhausting for visitors to go through so many pictures, Mr. Uféras said, adding that all of the photos in the albums were digitized and can be viewed on tablets at the exhibition. Walking through the rooms of the Carré de Baudouin, in a grand 18th-century building acquired by the city to host free cultural events, it is difficult not to be struck by the simplicity and joy of Roniss black-and-white pictures.

Lovers appear in many of Roniss pictures and he knew what others would say about that. Photographing couples on the banks of the Seine in spring what a cliché! But why deprive yourself of the pleasure? Ronis wrote in his photo album.

Every time I encounter lovers, my camera smiles; let it do its job. And then there are the gigantic barges on the Seine, with two small children playing in them, hidden from all but for the photographer on the bridge above (The Barge Children, 1959). Ronis wrote that this was the photograph that made me understand, above and beyond my everyday work, the true meaning of what I was striving for to reveal the innocence and joy of simple pleasures. Given that he was a man of the left, it is surprising there are no photos of the student-led uprisings of May 1968, which are being remembered in this 50th-anniversary year.

It is a strange and revealing detail for a photographer who, in addition to recording people at work and play in the streets, had often documented other protests and strikes. Since he was a communist, and the Communist Party opposed both the strikes and the students revolt, Mr.

Gautrand said, he probably disapproved of it, I discussed the topic, however, with Robert Doisneau, he continued. He, too, refused to take pictures of the events: He was adamant that the students were bourgeois, fooling around, and wanted nothing it. When Ronis had nothing nice to say, he said nothing at all. You will not find one single nasty image in my work, he told a journalist of the French newspaper Le Monde in 2005.

I have never wanted to show people in a ridiculous way. Compassion and empathy are probably the best ways to describe his attitude toward the many people who caught his eye throughout the 20th century. As the surrealist poet Philippe Soupault wrote, Willy Ronis has his heart in his eyes. Please check all the photos.