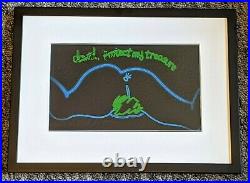 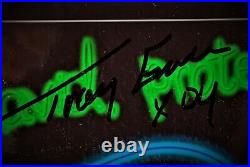 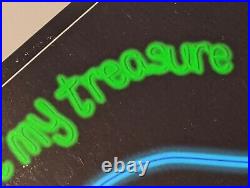 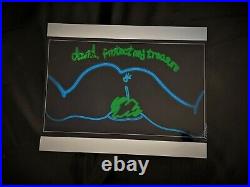 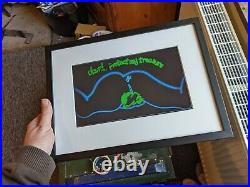 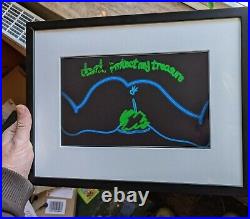 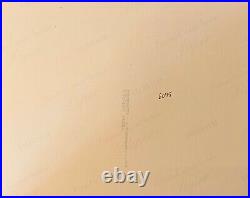 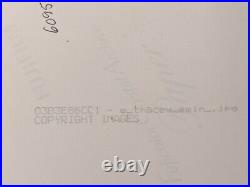 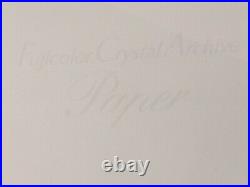 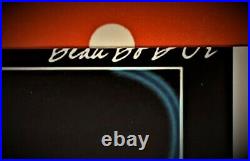 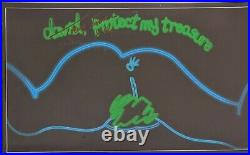 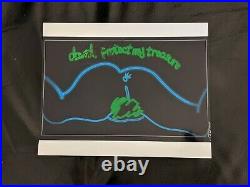 Provenance - signed glossy photograph obtained via writing to Emin's studio in 2004. On Fujicolor Crystal Archive Paper. Tracey Emin lives and works in London and has been exhibiting widely in Europe and Japan since 1993. A large museum exhibition of her work opened in 1997 at the South London Gallery in London and travelled to the Gesellschaft für Aktuelle Kunst in Bremen, Germany.

This was Emin's first one-person exhibition in the United States. Tracey Emin was born in London in 1963 and was raised in the seaside town of Margate on the English coast. After leaving school at an early age, Emin enrolled at Maidstone College of Art in Kent at the age of 20 and studied painting. She then went to London where she completed a Masters in Painting at the Royal College of Art.

Emin is a storyteller whose subject matter comes from Emin's own rich life. Emin's first one-person gallery exhibition at the White Cube titled "My Major Retrospective" included family memorabilia accompanied with each related story and also presented an archive of Emin's early paintings which she had destroyed.

Her book "Exploration of the Soul" told the story of her life from her and her twin brother's conception, their birth and early life to the age of 13. She presented this collection in a series of readings during a journey across America. In 1995, Emin opened The Tracey Emin Museum in London. "Every Part of Me's Bleeding" consisted of many works done in a variety of media including several large-scale sculptures, drawings, neon pieces, video and a quilt.

One large-scale piece in the exhibition is a seaside beach hut from a past vacation spot of Emin's friend artist Sarah Lucas, Emin and a former boyfriend. The actual hut had been carefully taken apart and reassembled in the main gallery space.

Through the poetry of her honest retelling of unique and intimate life-events Emin establishes a generous dialogue between the viewer and the artist. The personal expands to the universal in the way Emin takes a feeling about her life and forms it into a genuine expression of a human emotion.

Tracey Emin CBE RA was born in London in 1963 and raised in Margate before studying at Maidstone College of Art and The Royal College of Art, London. Renowned for her installation in the Sensation exhibition at The Royal Academy in 1997, she has exhibited extensively internationally.

Her work combines the personal, intimate and honest with the bold and scandalous, and encompasses needlework, sculpture, photography, drawing, painting video and installation. In 2007, Emin represented Britain at the 52nd Venice Biennale, was elected a Royal Academician and awarded an Honorary Doctorate from the Royal College of Art, London, a Doctor of Letters from the University of Kent and a Doctor of Philosophy from London Metropolitan University.

Emin was Eranda Professor of Drawing at the Royal Academy Schools from 2011 to 2013. She lives and works in London. Please look at my other items including rare modern and contemporary art and design pieces. This item is in the category "Art\Art Photographs".

The seller is "ashbinx74" and is located in this country: GB. This item can be shipped worldwide.