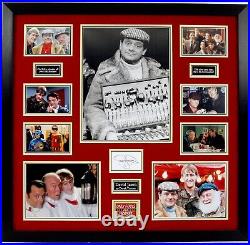 About the Item On offer here is a framed photo signed by Sir David Jason. Sir David John White, OBE (born 2 February 1940), better known by his stage name David Jason, is an English actor and comedian. He played Derek "Del Boy" Trotter in the long-running BBC comedy series Only Fools and Horses, and Detective Inspector Jack Frost on the ITV crime drama A Touch of Frost. Other high-profile television roles were as Granville in the sitcom Open All Hours, and Pa Larkin in the comedy drama The Darling Buds of May as well as the voices of Mr. Toad in The Wind in the Willows, Danger Mouse and Count Duckula.

His last original appearance as Del Boy was in 2014, while Jason retired his role as Frost in 2010. Jason was made an Officer of the Order of the British Empire (OBE) in 1993, and knighted in 2005, both for services to drama. Jason has won four British Academy Television Awards (BAFTAs), (1988, 1991, 1997, 2003), four British Comedy Awards (1990, 1992, 1997, 2001) and six National Television Awards (1997, 2001, 2002 twice, 2003, 2011). These included the British Comedy Awards Lifetime Achievement Award in 2001, and the BAFTA Academy Fellowship Award in 2003. The signature is an original and authentic autograph given by the person listed above. This item was obtained, in person, by us or on our behalf. The size of the framed item 770 x 740 mm approx. About the Certification The item comes with a COA (Certificate of Authenticity) from us (Matrix Frames). We are AFTAL Approved Dealer No. We will package the item safely and use the appropriate service (listed below) to get your item to you as soon as possible. We may sometimes have multiples of the photos we sell. Therefore the one you receive could be signed in a slightly different place. However, we also accept cheques and postal orders. This item is in the category "Collectables\Autographs\Certified Original Autographs\Film". The seller is "matrix-frames-autograph-store" and is located in this country: GB. This item can be shipped to United Kingdom.