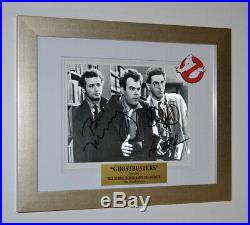 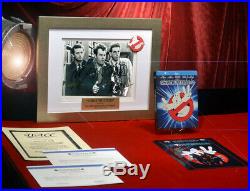 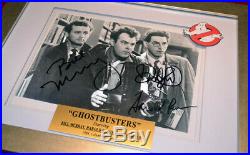 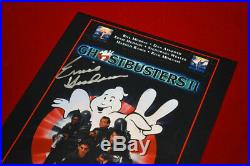 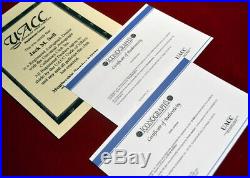 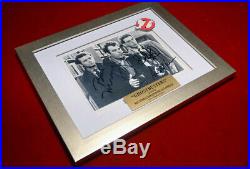 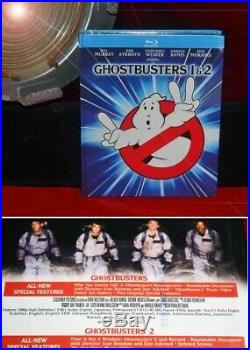 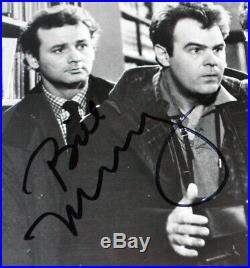 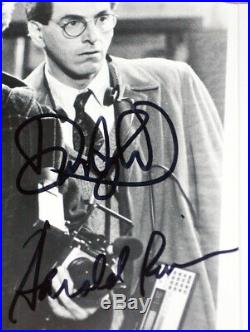 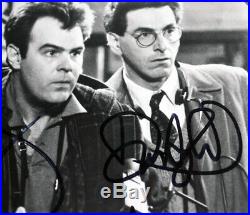 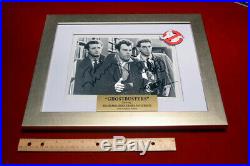 This unique FRAME also has this great "GHOTBUSTERS" LOGO from the movie attached to the glass... You also receive this great ERNIE HUDSON signed 8x10 color photo from the film!

It has this ENGRAVED PLAQUE attached to the frame that reads. ERNIE HUDSON signed his separate 8x10 color photo in Silver Ink.. This very RARE Autographed DISPLAY is just ready to display in your Home, Office, Media Room or Museum!

You also receive this factory sealed Blu Ray DVD with these "extras" of this classic oscar winning motion picture, "GHOSTBUSTERS 1 & 2". Ghostbusters is a 1984 American supernatural comedy film directed and produced by Ivan Reitman and written by Dan Aykroyd and Harold Ramis. The film stars Bill Murray, Aykroyd and Ramis as eccentric parapsychologists who start a ghost-catching business in New York City.

Sigourney Weaver and Rick Moranis co-star as a client and her neighbor, and Ernie Hudson as the Ghostbusters' first recruit. Aykroyd conceived the film as a project for himself and fellow Saturday Night Live alumnus John Belushi, with the "Ghostmashers" traveling through time and space in the future with magic wands. He and Ramis dramatically rewrote the script following Belushi's death and after Reitman deemed Aykroyd's initial vision financially impractical.

Ghostbusters was released in the United States on June 8, 1984. It was nominated for two Oscars at the 57th Academy Awards for Best Visual Effects and Best Original Song (for the eponymous theme song), but lost to Indiana Jones and the Temple of Doom and The Woman in Red respectively. The American Film Institute ranked Ghostbusters 28th in its AFI's 100 Films... 100 Laughs list of film comedies.

In 2015, the United States Library of Congress selected the film for preservation in the National Film Registry, finding it "culturally, historically, or aesthetically significant". The film launched a media franchise, which includes a 1989 sequel, Ghostbusters II , two animated television series, The Real Ghostbusters and Extreme Ghostbusters , several video games and a 2016 reboot film. The original AUTOGRAPH has been stored in an acid free case in a smoke free, pet free environment until removed to put in the exhibit.

This one-of-a-kind framed "GHOSTBUSTERS" AUTOGRAPH is framed and ready to display in your Media Room, Office or Museum! The condition of the Autograph is very good... Colors are bright and makes a nice overall great presentation. Check out our other auctions for more TV & Movie Collections that include other DISPLAYS & COLLECTIONS + other Wardrobes, Props, Art & Autographs. Sell is a Registered Dealer with the U. We are proud that some of our memorabilia is on display in the SMITHSONIAN, Washington, D. Heimdell51 Praise: Great guy; very prompt & efficient service & exc. Packaging; got a free bonus too! Austinpowheinybeer Praise: GREAT GREAT GREAT!! Toothfella Thanks for the super helmet Jack! Hope to do business again.

THANKS TO THE OTHER 10,000 GREAT EBAYERS WE'VE HAD THE HONOR OF WORKING WITH FOR OVER 15 YEARS.... AND, WE LOOK FORWARD TO MEETING MANY MORE GREAT EBAYERS IN THE FUTURE FROM ALL OVER THE WORLD!

If this autograph is declared not to be authentic, we may ask the purchaser to supply the full written opinion of one competent authority acceptable to us. This particular Framed Collection includes a very RARE Original 8x10 PHOTO Signed by the Legendary Star & Oscar Nominee BILL MURRAY, HAROLD RAMIS (rip) & DAN AYKROYD with the original Certificate of Authenticity (COA) that guarantees the GHOSTBUSTERS Autograph genuine for life by world renowned ICONOGRAPHS Autographs + guaranteed genuine for life by UACC Registered Dealer #228 with a BONUS Autograph of ERNIE HUDSON on an 8x10 color photo... You also receive a new Gold FRAME, Engraved PLAQUE with "Ghostbusters" LOGO, a factory sealed Blu Ray DVD! A GREAT piece of Motion Picture history....

A real "One of a Kind" Find & Conversation Pieces.... Movie & Television Props & Autographs can make for a good investment as well! Check out our other auctions for more great finds that include.

Props, Costumes & Autographs for your favorite movies... Imagine giving this great Autographed. Cast Collection to the BILL MURRAY, DAN AYKROYD, HAROLD RAMIS & ERNIE HUDSON Fan in your family or just keeping it for yourself for what could be a good investment!