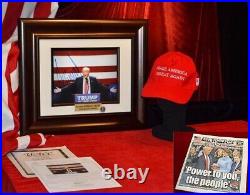 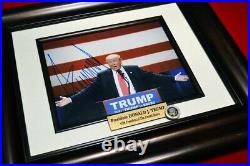 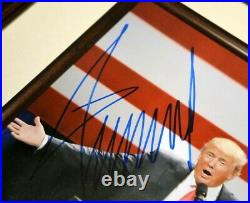 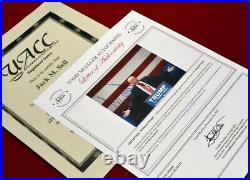 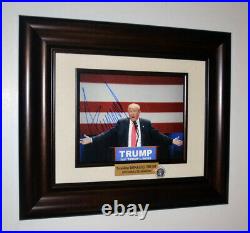 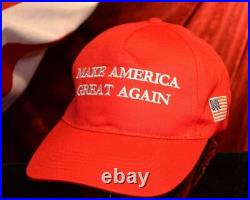 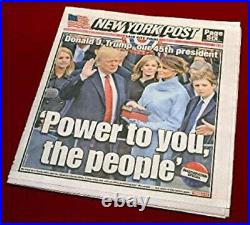 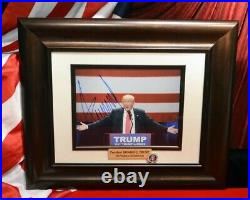 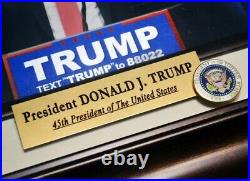 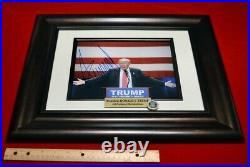 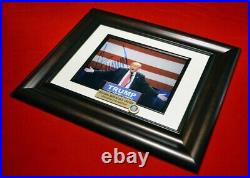 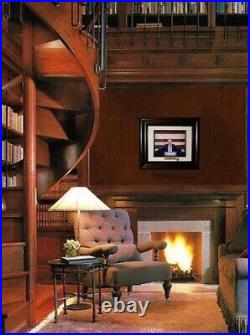 + A Campaign HAT, "Make America Great Again". + A Certificate of Authenticity (COA) issued by world renowned TODD MUELLER AUTOGRAPHS & Signature guaranteed for life by UACC Registered Dealer #228. He signed his name in his own hand on this 8x10 Color Photo in BLUE marker.. It also has this Description PLAQUE under his Autograph... Next to it is mounted a metal Presidential Seal. THIS IS NOT A COPY... THIS IS PRESIDENT DONALD TRUMP'S ACTUAL ORIGINAL SIGNATURE. This valuable TRUMP original Signature was acquired and authenticated world renowned TODD MUELLER AUTOGRAPHS and guaranteed for life by the UACC Registered Dealer #228 and includes the Original CERTIFICATE OF AUTHENTICITY. This RARE Autograph is mounted in a new large brown Glass display in this acid-free matted Presidential FRAME. The entire piece measures approximately 18" x 16"... The original Signed PHOTO measures 10" x 8".. This DONALD TRUMP Autograph is Absolutely Authentic, is in very Good Condition, and is mounted in a beautiful Creative Framed Exhibit... Just ready to hang in your Office, Home or Museum. And, you also receive this new, mint Donald Trump CAMPAIGN CAP, "Make America Great Again". You also receive this complete New York Post NEWSPAPER with "Inauguration" on the front page.. Inside the other sections of the newspaper is a complete breakdown of the election & inauguration with many different articles and photos. A GREAT "President DONALD TRUMP" Collection! This is a museum quality FRAMED Display of President DONALD TRUMP, real estate magnate, television star & politician... Ready to display on the wall in your Home, Museum or Office. All of our collections are professionally designed by Adrianne Richmond, our Award-Winning Chicago-based Art Director. (born June 14, 1946) is an American politician, business magnate, investor, television personality, and author.

He is the 45th President of the United States, he is the chairman and president of The Trump Organization and the founder of Trump Entertainment Resorts. He hosted The Apprentice , a US TV show. Trump is a son of Fred Trump, a New York City real estate developer.

Donald Trump worked for his father's firm, Elizabeth Trump & Son, while attending the Wharton School of the University of Pennsylvania, and, in 1968, officially joined the company. He was given control of the company in 1971, renaming it The Trump Organization.

CHECK OUT OUR OTHER AUCTIONS FOR MORE GREAT HISTORICAL EXHIBITS, including other Presidential Displays, a Piece of the White House, an original Piece of the White House Red Room & other Presidential Autographs & Collections. If this autograph is declared not to be authentic, we may ask the purchaser to supply the full written opinion of one competent authority acceptable to us.

Sell is a Registered Dealer with the U. We are proud that some of our memorabilia is on display in the SMITHSONIAN, Washington, D. Heimdell51 Praise: Great guy; very prompt & efficient service & exc. Packaging; got a free bonus too!

This item is in the category "Collectibles\Historical Memorabilia\Political\US\Presidents & First Ladies". The seller is "jackmsell" and is located in New Port Richey, Florida. This item can be shipped worldwide.