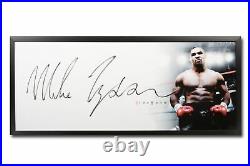 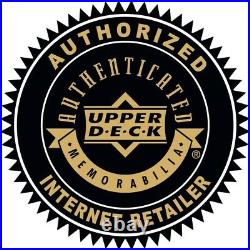 Mike Tyson Autographed 44X18 Framed Photo This item is not limited Mike Tyson aka Iron Mike aka The baddest man on the plant is a former undisputed heavyweight champion of the world. He made his professional debut at the tender age of 18. By the age of 20, Tyson became the youngest boxer to win the WBC, WBA, and IBF heavyweight titles and the first to hold them simultaneously. The young titan began his career by winning his first 19 bouts by knockout.

If you werent in your seat early, you may have missed the fight due to his 12 first round knockouts. Tyson was known for his strength, speed, accuracy, timing, coordination, and overall power. His boxing prowess has led many to believe that he was the last great heavyweight fighter. His overwhelming success in the ring quickly led to many accolades and national media attention. A popular video gaming company even released a boxing game with his namesake that went on to sell over a million copies.

Mike Tyson is one of the greatest boxers of all time and Ring Magazine has Tyson on their list of "The Greatest Heavyweights of All-Time", their "Best Fighters if the Last 80 Years, and their "100 greatest punchers of all time. The Show' features a custom acetate overlay of a confident and ripped Mike Tyson standing in the ring. Behind him you see the ropes of the ring, the stadium lights, and a camera lens. This unique 46x20 framed piece includes a large black signature from Tyson.

His autograph been authenticated by virtue of Upper Deck Authenticated's Five-Step Authentication Process. Cardboard Legends is proud to announce that in 2016 we became an. The relationship allows us to provide you a robust catalog of the greatest memorabilia being produced today. While we make every effort to keep our inventory numbers as accurate as possible, it can sometimes take several days for quantities from Upper Deck to be adjusted, which may result in an item no longer being available. Framed items may be even longer to process at this time.

Due to the mechanics of our relationship with Upper Deck, we cannot provide specific photos and information about the exact item you will receive. Autographed guaranteed and certified by Upper Deck Authenticated (UDA). This item has been hand-signed by the athlete or athletes. This is NOT a reproduced autograph. Size/Product Type: 44" X 18".