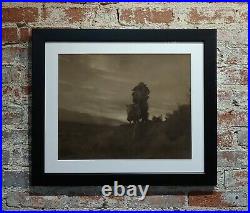 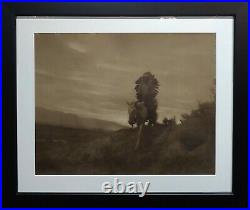 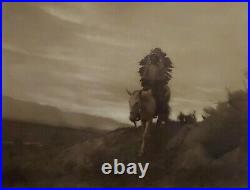 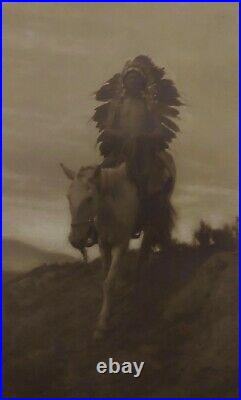 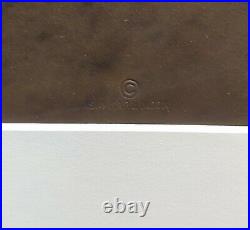 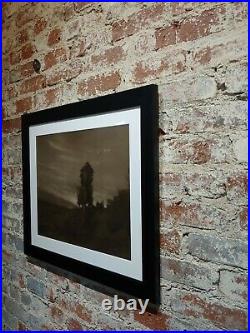 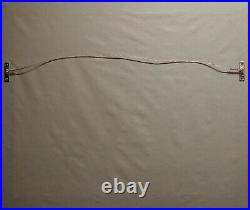 Frame size 18 x 18. Photo size 10 x 10. Carl Moon or Karl, as he spelled his name prior to World War I, was an American photographer, painter, illustrator, poet, writer and collector of Native American artifacts who was born in Wilmington, Ohio on October 5, 1878. He was the son of Sylvester Bronston, a noted country physician of his time, and Lucy Brunetta (Gudgeon) Moon. Moon was a successful photographer, book and magazine illustrator, painter and writer on Indian subjects.

He graduated from Wilmington High School and was a member of the Ohio National Guard in 1897. During his lifetime, he lived in Albuquerque, New Mexico; Grand Canyon, Arizona; and Pasadena, California. As a painter he studied with visiting artists Thomas Moran, Frank Sauerwein and Louis Akin.

He was often called the imitator of Edward Curtis and was the last of the great early photographers to go west. From 1904 to 1907, he ran a photographic studio in Albuquerque, where he made the first collection of photographs and paintings of the Pueblo Indians. It was probably inevitable that a photographer in Albuquerque, New Mexico, in 1904, would specialize in depicting Southwestern Indians. Moon not only achieved distinction for his photographs but for the oil paintings he began making shortly after his arrival in New Mexico.

Moon left Albuquerque in 1907 to handle Fred Harvey's art business at the Grand Canyon. He also assisted Harvey and the American Museum of Natural History in New York in acquiring collections of paintings of Indians, which are now highly prized. He married in 1911 and moved to Pasadena, California, in 1914, where he is remembered as a landscape painter and author. His wife, Grace, shared his interest in Southwest Indians. He began working with his wife as co-writer and as illustrator on children's books about Indians Lost Indian Magic (1918), Wongo and the Wise Old Crow, The Flaming Arrow (1927), Painted Moccasin (1931), and many other Indian and Mexican stories for children.

For the American Museum of Natural History and for Harvey, Moon made a historic collection of pictures of American Indians. He also collected Indian prints for the Library of Congress and for the Montclair Museum.

He was a member of the Pasadena Art Association. Moon died in San Francisco on June 24, 1948. Please check all the photos.