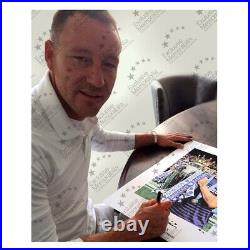 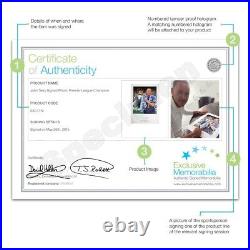 This ensures that the certificate can only be used to authenticate the item for which there is a corresponding number. If anyone attempts to remove either hologram it will destruct, so it is impossible to transfer the holograms to other items. Our company number and details are included on the certificate, with details of when and where the product was signed. Each certificate includes a photo of the sportspeople or celebrity signing one of the product line at the relevant signing session.

For logistical reasons it is impossible to photograph every product being signed, but showing that the sportsperson or celebrity was present and signing items is, we believe, the best way to demonstrate the legitimacy of your products. Please note that the product image displayed here and reproduced on the certificate is a stock photo and not necessarily a picture of the item you will receive. Because all our products are hand signed, the signature and placement on the item you receive might vary slightly. Update: Please note we are still sending out orders as normal. At Exclusive Memorabilia we understand that authenticity is the number one consideration for any customer when shopping with us and that is why we unconditionally guarantee the authenticity of all our signatures. To protect your investment, all our items come with a Certificate of Authenticity, which includes the details of the signing session plus a photo of the player or celebrity signing one of the product line at the signing session. The certificate guarantees the authenticity of your product. For your peace of mind, our company details are printed on the certificate.

We specialise in football, boxing, rugby, tv and film memorabilia. This means that the majority of items we stock are from closed signing sessions that a director from Exclusive Memorabilia has attended, and witnessed the items being signed.

The remainder are bought from a handful of trustworthy companies with whom we have been dealing for a number of years, and who we know to have the same standards as ourselves. Because we have worked with the players and their agents for many years, they trust us, and often recommend us to each other personally. We never accost footballers outside training grounds or celebrities outside premieres as we don't believe this is the correct way to do business. Furthermore, the quality of a signature from a signing session is usually much better than one grabbed outside a training ground through a car window.

Watch footage from our signings. This item is in the category "Sports Memorabilia\Football Memorabilia\Autographs (Original)\Signed Photos\Premiership Players/ Clubs". The seller is "exclusivememorabilialtd" and is located in this country: GB. This item can be shipped worldwide.