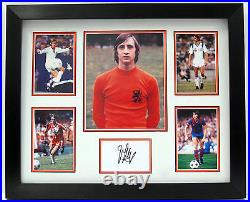 About the Item On offer here is a signed framed display of Johan Cruyff. -- Hendrik Johannes Cruijff OON (born 25 April 1947 in Amsterdam), known as Johan Cruyff, is a retired Dutch footballer and is currently the manager of the Catalan national team as well as a member of the AFC Ajax board of directors.

He won the Ballon d'Or three times, in 1971, 1973 and 1974, which is a record jointly held with Michel Platini and Marco van Basten. Cruyff was one of the most famous exponents of the football philosophy known as Total Football explored by Rinus Michels, and is widely regarded as one of the greatest players of all time. After his retirement from playing in 1984, Cruyff became highly successful as manager of Ajax and later FC Barcelona; he remains an influential advisor to both clubs.

His son Jordi has also gone on to play football professionally. In 1999, Cruyff was voted European Player of the Century in an election held by the IFFHS, and came second behind Pelé in their World Player of the Century poll. He came third in a vote organised by the French weekly magazine France Football consulting their former Ballon d'Or winners to elect their Football Player of the Century. -- The signature is an original and authentic autograph given by the person listed above. The size of the display that's been signed is 600 x 500 mm Approx.

About the Certification The item comes with a COA (Certificate of Authenticity) from us (Matrix Frames). We are AFTAL Approved Dealer No.

This item was obtained, in person, by us or on our behalf. We will package the item safely and use the appropriate service (listed below) to get your item to you as soon as possible. However, we also accept cheques and postal orders. This item is in the category "Collectables\Autographs\Certified Original Autographs\Sport". The seller is "matrix-frames-autograph-store" and is located in this country: GB.

This item can be shipped to United Kingdom.