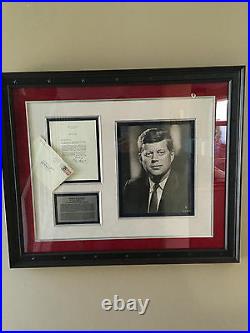 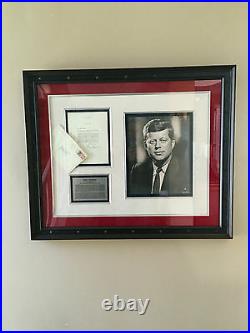 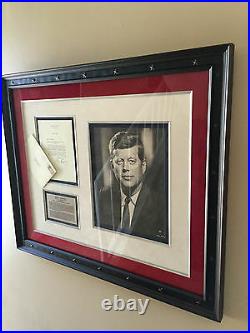 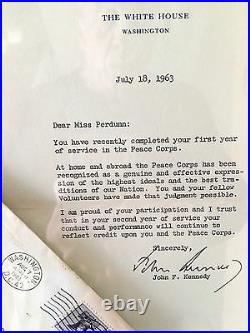 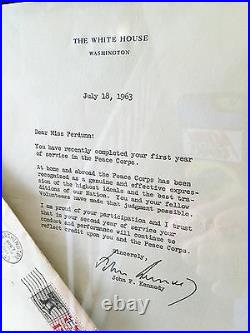 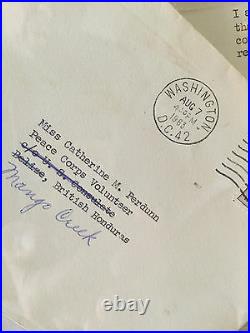 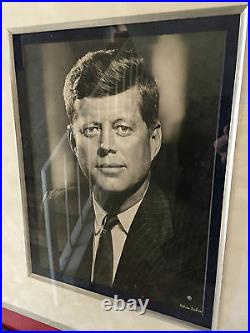 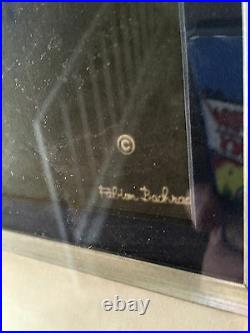 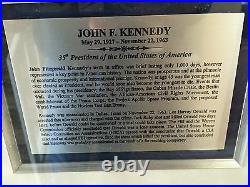 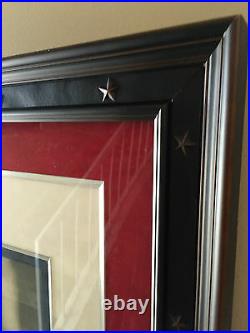 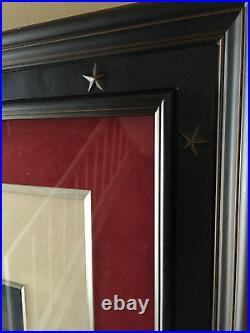 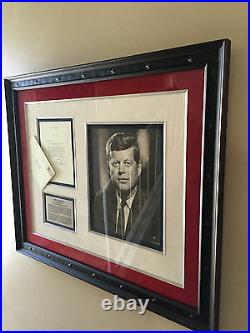 "White House letterhead 1963 typed letter signed with Peace Corp content plus original post marked mailing envelope ". The summer of 1963 was high noon for President John Fitzgerald Kennedy. Only one month earlier he had just "rocked the boat again" delivering his ground breaking "Peace Speech" at the American University. Conspirators were hard at work making plans to end his life in less than four months. Kennedy's term as President was only 1,000 days.. Here's an opportunity to add an extremely rare original vintage JFK signed as President typed letter of congratulations to a member of his newly formed Peace Corp. This is a typed letter on White House stationery at an affordable price. This letter was considered secretarial or autopen signed. NOTE: We had the letter and the envelope examined by two different expert graders. One said auto-pen signed and the other expert said the pressure of the ink was too unevenly distributed in the signature which is very inconsistent with an autopen.

So there you have it. You very seldom see any JFK letters for sale and anything signed by President Kennedy during his 1,000 days in office is extremely rare and valuable and priced out of reach of most collectors.

John Fitzgerald Kennedy's term in office was brief lasting only 1,000 days however, represented a key point in American history. The nation was prosperous and at the pinnacle of economic prosperity and international prestige.

Kennedy at age 43 was the youngest man ever elected President, and he would soon also become the youngest to die. Events that occurred during his presidency; the Bay of Pigs fiasco, the Cuban Missile Crisis, the Berlin Wall, the Vietnam War escalation, the African American Civil Rights Movement, the establishment of the Peace Corps, the Project Apollo Space Program, and the proposed World Peace and Nuclear Test Ban Treaty.

Kennedy was assassinated in Dallas Texas on November 22, 1963. Lee Harvey Oswald was arrested that afternoon and charged with the crime. Jack Ruby shot and killed Oswald two days later, before Oswald could be questioned or a trial take place. The FBI and the Warren Commission officially concluded that Oswald was a lone assassin.

The United States House Select committee on Assassinations (USCA) agreed with the conclusion that Oswald, a CIA asset, and an alleged FBI operative, fired the shots which killed the President, but also concluded that Kennedy was probably assassinated as the result of a far reaching conspiracy. Please note we are not photographers therefore the actual colors may vary somewhat from what you viewed when you ordered.

Please read our feedback as the over-whelming majority of customers like the real thing much better. Unfortunately our photos do not do our displays justice so be prepared to be very pleasantly surprised as to the quality of the actual delivered framed historical investment quality display. The item "JFK Autographed JOHN F. KENNEDY signed 1963 White House Letterhead Museum Framed" is in sale since Monday, March 28, 2016.

This item is in the category "Collectibles\Historical Memorabilia\Political\US\Presidents & First Ladies". The seller is "themerchantofmemories" and is located in Marina del Rey, California. This item can be shipped worldwide.