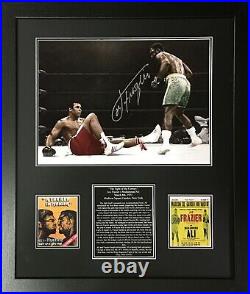 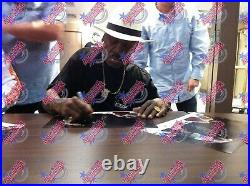 He bacame world heavyweight boxing champion from February 16, 1970, when he knocked out Jimmy Ellis in five rounds in New York City, until January 22, 1973. In 1970 when Muhammad Ali was reinstated to the sport, and a bout between the undefeated former champion and Frazier was inevitable. On March 8, 1971, the two heavyweights met in Madison Square Garden in the fight billed as The Fight of the Century. The two fought at a furious pace for 15 rounds and Frazier scored a decision over him. Frazier faced Ali again in 1974, losing a 12-round decision.

On October 1, 1975, the two faced off in the Philippines for a third time. The fight, known as the Thrilla in Manila, was for the heavyweight championship, and this time Ali was the winner by technical knockout after 14 grueling rounds. After a few more fights, Frazier retired in 1976. Frazier was inducted into the International Boxing Hall of Fame in 1990. Here is a 16×12 inch photo of Frazier after knocking down Muhammad Ali during The Fight of the Century. The photo has been personally signed by Joe at a signing session carried out and attended by Allstarsignings and has been professionally framed to an approximate size of 20x24. The item comes with an Allstarsignings certificate of authenticity which will have photographic proof inserted into it. All framed orders are sent by Courier on a 24-48 hour service. All international orders for framed products are sent by fully tracked courier services. All of our items come accompanied by our Certificate of Authenticity to provide you with added peace of mind. The Allstarsignings certificate will state the date of the signing and as well as incorporating photo proof of the signing and the company address. Allstarsignings is a Manchester based sports memorabilia company.

Established in 2000 we specialise in high quality hand signed autographed items. All items come directly from private signings and supplied with a speedy, reliable service. All of our autographs are individually hand signed by the stars comes with our Certificate of Authenticity incorporating photo proof.

Allstarsignings have carried out hundreds of signing sessions with many stars including Pele, Eric Cantona, Kenny Dalglish, Jonny Wilkinson, Thierry Henry, Dennis Bergkamp, Ryan Giggs, George Best, Sugar Ray Leonard, Anthony Joshua and many many more. Huge range of signed products available. Allstarsignings is owned and run by sports fanatics and was born from our own enthusiasm for collecting autographs. All Star Signings, the number one source for signed memorabilia and autographs!

This item is in the category "Sports Memorabilia\Boxing Memorabilia\Photographs". The seller is "*allstarsignings*" and is located in Manchester. This item can be shipped to United Kingdom.