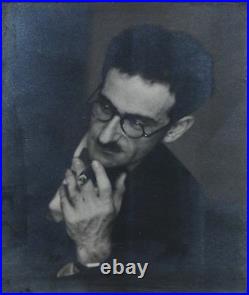 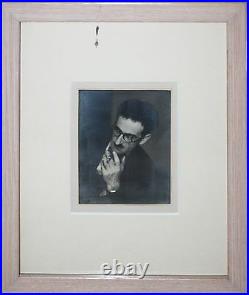 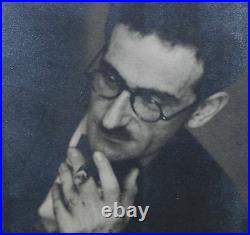 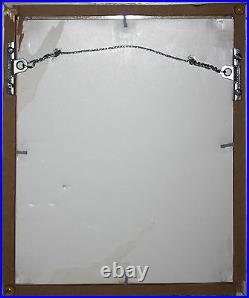 Dealsrus is well known for offering quality artwork at reasonable prices. Our reputation is stellar and we stand behind everything we sell. We also accept payments through Authorize net. Our company name is EastCoastArt.

PLEASE NOTE: this is an original gelatin silver print, not a recent reproduction. Looks excellent, in "as found" original untouched condition, minor creases, light water stains on left edge, mounted on matte board, scuff on glass, not examined out of the frame-- please look at photos carefully. Fantastic composition by important photographer Dorothea Lange depicting a male portrait. Lange's portraits are highly significant among 20th century photography, particularly her "Migrant Mother" image which became an icon of the Great Depression. This is a fine example of her work in great condition. Dorothea Lange was born in Hoboken, New Jersey, in 1895 and studied photography in New York City before the First World War. In 1919, she moved to San Francisco, where she earned her living as a portrait photographer for more than a decade. During the Depression's early years Lange's interest in social issues grew and she began to photograph the city's dispossessed. A 1934 exhibition of these photographs introduced her to Paul Taylor, an associate professor of economics at the University of California at Berkeley, and in February 1935 the couple together documented migrant farm workers in Nipomo and the Imperial Valley for the California State Emergency Relief Administration. Copies of the reports Lange and Taylor produced reached Roy Stryker, who offered Lange a job with the Resettlement Administration in August 1935. Unlike the agency's other photographers, Lange did not move to Washington but used her Berkeley home as a base of operations.

She and Taylor were married that winter. The valley was in a state of crisis, and on February 16 Lange reported on the situation to Stryker. I was forced to switch from Nipomo to the Imperial Valley because of the conditions there. They have always been notoriously bad as you know and what goes on in the Imperial is beyond belief. The Imperial Valley has a social structure all its own and partly because of its isolation in the state those in control get away with it.

But this year's freeze practically wiped out the crop and what it didn't kill is delayed--in the meanwhile, because of the warm, no rain climate and possibilities for work the region is swamped with homeless moving families. The relief association offices are open day and night 24 hours.

The people continue to pour in and there is no way to stop them and no work when they get there. As many as six thousand migrants arrived in California from the Midwest every month, driven by unemployment, drought, and the loss of farm tenancy. Which he co-authored with Lange, Taylor wrote that the Okies and Arkies had been scattered like the shavings from a clean-cutting plane. Many drifted to the Imperial Valley after the completion of Boulder (Hoover) Dam in 1936, which guaranteed the valley a supply of water for irrigation. But the migrants, who competed with Mexicans and other immigrants for work, were offered not land, but jobs on the land.

The land was held by relatively few owners. In 1935 one-third of the farm acreage in the six hundred square miles of the Imperial Valley consisted of operations in excess of five hundred acres; seventy-four individuals and companies controlled much of the cropland.

In his biography of Lange, Milton Meltzer includes a marvelous account of Lange's trip. He reports that shortages of funds had led Stryker to lay off the photographer in October 1936. After two months of anxiety for them both, Stryker was able to rehire Lange in late January 1937; the photographer and her friend Ron Partridge set out for the valley the day after Stryker approved the trip. Long, exhausting days of photography were followed by overnight stays in rickety tourist courts paid for by Lange's four-dollar-per-diem maintenance allowance. Partridge has described how Lange worked.

She would walk through the field and talk to people, asking simple questions--what are you picking? How long have you been here?

When do you eat lunch? I'd like to photograph you, she'd say, and by now it would be "Sure, why not, " and they would pose a little, but she would sort of ignore it, walk around until they forgot us and were back at work. In the file, Lange's ninety-seven Imperial Valley photographs from 1937 are integrated with more than one hundred other images of California migrants she made that year.

Some of her Imperial Valley photographs document conditions: the makeshift camps on the banks of irrigation ditches, the use of irrigation water for cooking and washing, the crowds at the relief offices, and, when work was available, the stoop labor. Her photography was not limited to Okies and Arkies for she also photographed the camps occupied by Mexican laborers, a Japanese-owned farm, and Filipinos picking lettuce. The most poignant and moving photographs from Lange's trip convey a mood rather than describing circumstances or activities: the man hunkered at the edge of the field, the mother and child in the tent opening, and the trio of men, one of whom casts a defiant glance at the photographers. The photographs are character studies that render the textures of skin and clothing with an artist's eye and depict posture, gesture, and gaze with an ethnologist's. But their subjects are anonymous and the pictures become genre studies: "the pea picker" or the jobless man on relief. Lange's photographs were intended to bolster support for the establishment of migrant camps in the area by the Resettlement Administration.

" She added that the situation was "no longer a publicity campaign for migratory agricultural labor camps" but rather "a major migration of people and a rotten mess. Much of Lange's correspondence with Stryker during this period concerns the distribution of prints of these photographs. She saw an immediate need for pictures by the agencies endeavoring to help the migrants and received permission to supply prints to the head of the state emergency relief office in the Imperial Valley and to the Resettlement Administration's regional office. She also wanted to supply photographs to a variety of other organizations and, between 1937 and 1940 the pictures were used in a report to the U.

Senate, in An American Exodus, for a Works Progress Administration exhibit in San Francisco, and by a number of newspapers and periodicals. Both Stryker and Lange were keen to place a story about migrants in.

Magazine, but disagreements about who would edit and submit material to the magazine muddled the process. In December 1936, Stryker found himself in a debate with his boss about whether the agency or the photographer should submit the story, and whether the agency should approve the final text and layout. The same issue also emerges in the correspondence between Lange and Stryker.

On 16 February 1937, as she set out for the valley, Lange wrote that she had contacted. About the story and that she wanted to send them some of this new Imperial stuff to choose from, if they decide to run the series. Is terribly interested in a migrant lay-out, but we are holding everything up now, awaiting the new migrant stuff you can send us.

" Ten days later, Lange asked, "Do you want me to do this story for. Or shall I send on the material with factual captions, place, date, etc. In the end Lange herself compiled the story, informing Stryker that she would limit the pictures to ones made in California and explaining that this would make "a more pointed story" than a series of pictures from across the nation. Lange submitted twenty-five pictures on the theme of human erosion, but Stryker had separately sent.

The set of pictures from the Senate report, instructing them not to use any photographs until the report had been published. Only one of Lange's photographs of migrants ultimately appeared in. At the end of a six-page spread on the Dust Bowl in the issue dated 21 June 1937, following an optimistic look at new farming practices designed to reduce erosion, the magazine displayed a striking full-page close-up of the man with the defiant glance, cropped from the center of the four-by-five-inch negative. Lange was not credited, although the agency was.

Did not present the unidentified man as a victim of human erosion but called him a "new pioneer" seeking a new life in California. His "courageous philosophy" led him to say, I heerd about this here irrigation. I figured that in a place where some people can make a good livin' I can make me a livin'.

In a 1964 interview conducted by Richard Doud, Lange discounted the contemporary impact of the Resettlement Administration and Farm Security Administration photographs, forgetting for a moment the fact that her own pictures had influenced public opinion and government policy. Use of her Imperial Valley photograph may have contributed to her bleak assessment that during the years [the section] was being formed, it was not a [public relations] success. " Recalling Stryker's encounters with major magazines, she asked, "Did Roy ever tell you of the many, many trips he made to New York, with pictures under his arm, trying to peddle them to periodicals and to publications, and didn't make it. That's a little bit humiliating, and embarrassing to him. The picture magazines were reluctant to use the Resettlement Administration and Farm Security Administration photographs, Lange speculated, because of the media's emphasis on current events. The photographs "got mixed up with news, " Lange told Doud, adding, This was a state and a condition we were describing, and had no appeal. But she concluded that the judgment of history has established the importance of the photographs. "But time of course is a very great editor, and a great publicist, " Lange said. Time has given those things the value. 100% Guaranteed to be as described.

We ask for your patience and assure you we are acting as quickly as we can. All lots are accompanied by a name and/or description and lot number for reference.

An approximation can be provided beforehand if requested. Thank you for your cooperation in the matter. All lots are guaranteed to be as described. Prospective buyers are responsible for asking any and all questions about the merchandise, and to view all photos carefully, before purchasing. We try to depict the merchandise and artwork as accurately as possible with photographs. We do not overly enhance the photos. However, every computer and monitor is different, and how we see the merchandise might differ from what you see. Please bear this in mind when viewing. Contact before purchasing for any questions you have.

Unless otherwise specified, frames are considered a throw-in and are not guaranteed in any fashion. Sizes listed in the descriptions are a very close approximation, ie.

If the painting is 12.2 x 14.2 we would describe such as a 12 x 14. The item "DOROTHEA LANGE- Important WPA Photographer-Signed Gelatin Silver Print-Portrait" is in sale since Wednesday, October 5, 2016. This item is in the category "Art\Art Photographs".

The seller is "dealsrus" and is located in Pottstown, Pennsylvania. This item can be shipped worldwide.