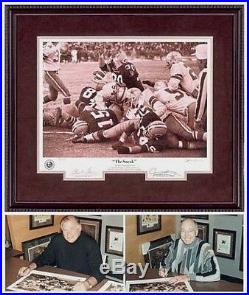 NOT ONLY THE GREATEST GREEN BAY PACKER OF ALL TIME. BUT AN EVEN GREATER PERSON. OWN A PIECE OF HISTORY. Signed by Bart Starr, Jerry Kramer and Photographer John Biever. 2018 HALL OF FAME INDUCTEE.

As seen on January 23rd 2015 on the ESPN SPECIAL. A special on the 4 photographers who have shot photos at every Super Bowl.

John Biever is one of the 4. Lambeau Field on New Year's Eve, 1967 would be the site for what would always be remembered as "The Ice Bowl" game between the Green Bay Packers and Dallas Cowboys. The Packers won the game 21-17, capturing their third straight NFL title but it was the biting cold and last second heroics of Bart Starr thet will always be remembered by Packers fans. Even by Wisconsin's harsh winter standards, the weather conditions were excessive. Bitter Canadian winds from the north, whipped through Lambeau Field, plunging the temperature to minus -13 degrees with a wind chill factor of -46 below zero at game time. The game came down to one last play with 16 seconds left on the clock. With Dallas leading 17-14, Bart Starr called a Quarterback sneak otherwise known as the "31 Wedge".

Starr took the snap and with perfectly executed blocks from Jerry Kramer, Ken Bowman and Forrest Gregg plunged through the gap for the touchdown and victory. About the Photographer : John Biever is a renowned Sports Photographer and has been a Sports Illustrated Staff Photographer. John was 16 years old when he took what is now his most famous photo as well as one of the NFL's most famous. As the story is told his father Vernon Biever and John were standing on the sideline of Packers bench and Vernon said we both shouldn't be here together. While I get shots of Lombardi's reaction, win of lose, why don't you go done to the End Zone and see what you can get.