1944 YOUSUF KARSH Photo of Princess Alice of Athlone, Orig Frame SIGNED by Both 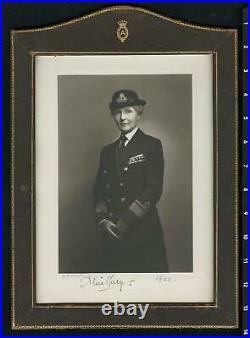 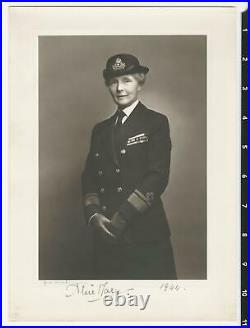 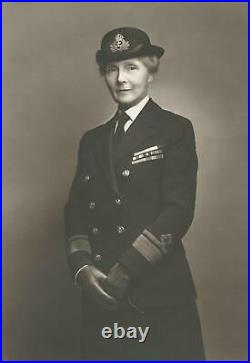 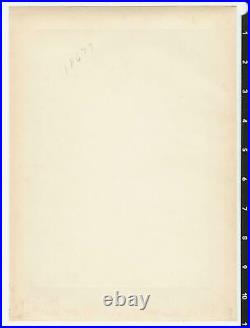 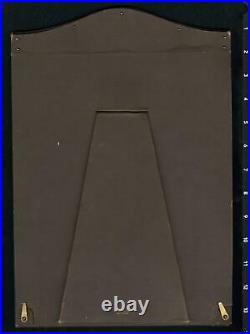 Just two years later Harsh was sent to live with his uncle, George Nakash, a photographer in Quebec. Karsh initially planned to become a doctor in his new homeland, but after working for his uncle discovered he had an interest in photography. He gave one of his photographs as a gift to a friend who secretly entered it into a contest.

It was there that Karsh resolved to photograph those men and women who leave their mark on the world. He achieved a relatively good reputation establishing an impressive clientele and had photographs published in newspapers across Canada. However, it was not until 1941 that Karsh took a photograph that would change his life.

Karsh photographed a scowling and defiant Winston Churchill. The image became a symbol of the spirit of Britain, and one of the most famous photographic portraits in the world. Karsh began to photograph the likes of Albert Einstein, Pope John XXIII, Queen Elizabeth, Pablo Picasso, Helen Keller, Ernest Hemmingway, Joan Miro, Anna Magnani, Elizabeth Taylor and thousands more. His work is held in the permanent collections of the International Photography Hall of Fame and Museum, the Museum of Modern Art, the Metropolitan Museum of Art in New York, the Art Institute of Chicago and many more. He held more than two dozen honorary degrees. Karsh has been the author and subject of many books, including The Faces of Destiny, (1946) In Search of Greatness: Reflections of Yousuf Karsh (1962), Karsh Portfolio (1967), Karsh Portraits (1976) and Karsh: A Fifty-Year Retrospective (1983).

_____________________ Princess Alice, Countess of Athlone , VA, GCVO, GBE (Alice Mary Victoria Augusta Pauline; 25 February 1883 3 January 1981) was a member of the British royal family. She is the longest-lived British princess by descent, and was the last surviving grandchild of Queen Victoria.

Princess Alice was godmother to Queen Beatrix of the Netherlands, who is the granddaughter of her first cousin on her mother's side, Queen Wilhelmina of the Netherlands. When the British royal family abandoned all Germanic titles in 1917, Prince Alexander of Teck adopted the surname Cambridge, became (briefly) Sir Alexander Cambridge, then the Earl of Athlone, relinquishing the title "Prince of Teck" in the Kingdom of Württemberg and the style Serene Highness. As such, the two surviving children lost their Württemberg princely titles.

Princess Alice relinquished her titles of Princess of Saxe-Coburg and Gotha and Duchess of Saxony, while her brother Charles Edward, Duke of Saxe-Coburg and Gotha, who held a commission in the German Army, was stripped of his British titles. Alice remained, however, a Princess of Great Britain and Ireland and a Royal Highness in her own right, as granddaughter of Queen Victoria in the male line. The Earl was appointed Governor-General of the Union of South Africa and served from 1924 to 1931. Princess Alice accompanied him and was the Vicereine during that period.

Lord Athlone and Princess Alice had a coastal beach house constructed at Muizenberg, which still stands today and is one of South Africa's national monuments. The Cape Town suburb of Athlone was named in honour of the Governor-General and, apart from the beach house and the preserved Class GL Garratt steam locomotive Princess Alice in the Outeniqua Transport Museum, that is the only physical reminder of the Athlones' residence at the Cape.

On the sudden death of the popular John Buchan in 1940, Canada found itself without a Governor General in time of war. Despite the longstanding intention of Canadian governments to indigenise the office and appoint Canadian nationals as governors generalAustralia had already done so with the appointment of Sir Isaac Isaacs as its governor general in 1931wartime seemed an unpropitious time for constitutional tinkering; the royal family had garnered vast public support during the Royal Tour of 1939; as Queen Mary's brother and a former governor general of another of His Majesty's Dominions, Lord Athlone seemed a satisfactory candidate, and the Prime Minister W. Mackenzie King advised the King to appoint him. Princess Alice accompanied her husband to Canada where he served as Governor General from 1940 to 1946, residing primarily at Rideau Hall in Ottawa. Their three grandchildren, Anne, Richard, and Elizabeth, lived with them in Canada for the duration of the war.

Upon taking up his post, The Earl immediately made himself active in the support of the war effort, travelling across the country and focusing much of his attention on the troops, either those training at military facilities or those injured and in hospital. Viewing his position as governor general as a link between Canadians and their monarch, Athlone also communicated in speeches that the King stood with them in their fight against Adolf Hitler and the Nazi regime. As vicereine of Canada, Princess Alice also supported the war effort by serving as Honorary Commandant of the Women's Royal Canadian Naval Service, Honorary Air Commandant of the Royal Canadian Air Force Women's Division and president of the nursing division of the St. In 1944, the Princess Alice Barracks Cabin at Britannia Bay provided a summer retreat for Royal Canadian Air Force Women's Division personnel based in Ottawa.

The war was brought close to home for the Athlones also because many of those belonging to displaced European royal families sought refuge in Canada and resided at or near the royal and viceroyal residence, Rideau Hall. Among the royal guests were Crown Prince Olav and Crown Princess Märtha of Norway; Grand Duchess Charlotte and Prince Felix of Luxembourg; King Peter of Yugoslavia; King George of Greece; Empress Zita of Bourbon-Parma (Austria) and her daughters; as well as Queen Wilhelmina and her daughter, Princess Juliana. Further, in December 1941, British prime minister Winston Churchill arrived at Rideau Hall, where he presided over British Cabinet meetings via telephone from his bed.

The viceregal couple also played host at Quebec City to prime minister Mackenzie King, as well as Churchill and United States president Franklin D. Roosevelt, who all gathered to take part in what would become known as the Quebec Conferences, with the first taking place between 17 and 24 August 1943 at the viceregal residence in La Citadelle, and the second occurring from 12 to 16 September 1944 at the Château Frontenac.

Photos of the Earl with Roosevelt, Churchill and Mackenzie King on the ramparts of the Citadel during the Quebec Conference were widely published at the time. It was at these meetings that the four men discussed the Allied strategies that would eventually lead to victory over Nazi Germany and Japan. When Germany fell on 8 May 1945 and Japan on 15 August of the same year, Athlone led the national celebrations held on Parliament Hill and elsewhere.

He thereafter spoke in speeches about Canada's future being marked not by war but by a strong role in reconstruction and reconciliation. During their time in Canada, the Athlones also supported various charitable and social events, and mounted a number of tobogganing parties and skating lessons on the grounds of Rideau Hall, as well as skiing in Gatineau Park.

Before the couple departed from Canada at the end of Athlone's time as the King's representative, he left as a legacy the Athlone-Vanier Engineering Fellowship, awarded by the Engineering Institute of Canada. At the end of World War II, the American Military Government in Bavaria, under the command of General George S. Patton, arrested and imprisoned Alice's brother, Charles Edward, Duke of Saxe-Coburg and Gotha (who served as a member of the Reichstag from 1937 to 1945), because of his actions as a Nazi supporter during the war. Alice, learning of her brother's incarceration, came to Germany with her husband to plead with his American captors for his release.

They would not yield, and in 1946, he was sentenced by a de-nazification court, heavily fined and almost bankrupted. In her lifetime, Princess Alice carried out many engagements and took part in many of the activities the royal family were involved in. She was also the Colonel-in-Chief of two British Army units and one Rhodesian Army unit. During the Second World War, she was Honorary Air Commandant of the Royal Canadian Air Force Women's Division. In 1950, she became the first Chancellor of the University of the West Indies (then the University College of the West Indies). As Chancellor, she visited the university every year, staying as a guest of Sir Kenneth Blackburne, Governor-General of Jamaica, and his wife. From the 1930s60s she was Chair of the Council (governing body) of Royal Holloway College, University of London. With her husband, daughter and son-in-law, Princess Alice represented the King at the 1937 wedding of Juliana of the Netherlands to Prince Bernhard of Lippe-Biesterfeld.

The princess and her husband visited Bahrain and Saudi Arabia in the winter of 1938. She was the first member of the British royal family to visit the country and the only one to meet King Abdulaziz. Their nephew Lord Frederick Cambridge accompanied them in the visits.

In Saudi Arabia Princess Alice visited Riyadh, Hofuf and Dammam, and met Noura bint Abdul Rahman, sister of the King and other members of the Saudi royal family. In 1966, Princess Alice published her memoirs, For My Grandchildren.

The Earl of Athlone died in 1957 at Kensington Palace in London. Princess Alice lived there until her death, dying in her sleep on 3 January 1981, at age 97 years and 313 days. At her death, she was the longest-lived British Princess of royal blood and the last surviving grandchild of Queen Victoria. The funeral of Princess Alice took place in St George's Chapel at Windsor Castle, attended by all members of the royal family.

She is buried alongside her husband and son in the Royal Burial Ground, Frogmore, directly behind the mausoleum of Queen Victoria and Prince Albert, in Windsor Great Park. Her daughter and son-in-law are also buried close by. She lived through six reigns: those of Victoria (grandmother), Edward VII (uncle), George V (cousin and brother-in-law), Edward VIII (first cousin once removed and nephew), George VI (first cousin once removed and nephew) and Elizabeth II (first cousin twice removed and grand-niece). Get images that make Supersized seem small. The item "1944 YOUSUF KARSH Photo of Princess Alice of Athlone, Orig Frame SIGNED by Both" is in sale since Thursday, April 9, 2020. This item is in the category "Collectibles\Photographic Images\Contemporary (1940-Now)\Celebrity\Other Celebrity Photographs". The seller is "zangroma" and is located in New York, New York. This item can be shipped worldwide.